I have a story to tell you. But before I do, I want you to know that I have tried my hardest not to embellish any of it and tell it as clearly as I remember it, with all of my thoughts and statements written as accurately and truthfully as I can. This is because it is a story that really needs no embellishment and can stand on its own merits. Although I’d had two beers at the time it occurred, my memory of the events that transpired is crystal clear because I retold it a few times through the course of the evening, and reinforced the details in my mind with each retelling. So without further ado, here it is.

Last night I went out to happy hour to meet some friends at a small brewpub downtown in the University district, a predominantly white part of town in a predominantly white city. I’d gotten there a little early, and the place was surprisingly empty. I sat down to try a couple of their ales and pass some time on the left side of the bar, which could seat about 8 people on the front and 3 more on the left end. In the middle was the serving area, with six of the taps in a large fountain that arose from the center of the bar and four more on either side. Can’t quite envision it? It looked like this: 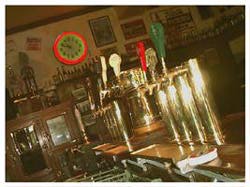 In front of it was the tip jar, an ornate hourglass-shaped opaque vase nearly a foot and a half tall and roughly six inches in diameter, presumably for the bartenders to share the spoils among each other equally.

Two ales later, a few more people had entered the bar and were sitting at the far right side of it, while I sat alone on the left side. Then around 5:15, in walks bling-bling homey G, about 5’10 and 220lbs with a bright red jumpsuit, sideways ballcap, gold-rimmed wraparound sunglasses, gold hanging from all the usual places, and the practiced swagger of a hip-hop star. A very black guy in a very white neighborhood. He goes up to the serving area in the middle of the bar, and positions himself to the right of the fountain. He asks the bartender for two drinks of some kind that require him to go down to the far end of it by the clock in the picture, where the other two patrons are sitting.

He says something about his girlfriend coming over soon as he watches the three of them closely, and when nobody is looking, sneaks his left hand into the tip jar. Sitting a few feet down to his left, he apparently didn’t notice me, and I caught his suspicious movement out of the corner of my eye. I looked over at him as he pulled his hand out of the jar and couldn’t see anything in his palm, and I hoped at that point he simply mistook it for breath mints. I thought to myself “Ohhh, he didn’t just do what I thought he did, did he?” But then I was stunned as he casually slipped that hand into the left pocket of his jumpsuit and quickly removed it. “Yeah, he did,” I thought.

I continued to look at him until he turned to look at me, and then I stared him down until he knew I had caught him red-handed, and he finally looked away. He said to the bartender that he came here all the time, but the bartender said “I’ve never seen you here before, but I don’t usually work days so I don’t know.”

Now I was faced with a dilemma. I’d never been to this bar before and the bartender didn’t know me any better than this guy. If I were to accuse him of the theft I had just witnessed, would my word be any better than his? Would I simply embroil myself in the middle of a pissing contest that ultimately ends up with chairs being thrown about the room, bodies going through glass picture windows onto the street, and a headline in tomorrow morning’s news? I looked around the room to see if anyone else was nearby that might have seen it, but no one was. I checked the ceiling for security cameras, but didn’t see any that would corroborate my story. My confusion with the situation turned to anger that this person, so obviously trying to convey an image of wealth, had the temerity to steal a couple of dollars from a bartender’s tip jar. I remembered my own situation of a few weeks before, when the bartender had used a shot glass to give me my bar tab. I put the cash in the glass next to it and then went to the bathroom. When I returned, my entire $38 had been stolen from it while the friend with whom I was there was engaged in conversation with someone else at the bar.

As these thoughts go through my mind, I could see him looking over at me frequently, watching to see what I was going to do. My facial expression must have clearly communicated the anger I was feeling because he came over to me and asked, “Hey man, can I buy you a drink?”

I looked him squarely in the eye and said, “You know, you’ve put me in a moral quandary here.”

“You have put me in a moral quandary,” I repeated.

“What are you talking about?” he asked.

“You know what I’m talking about. You know I saw you.”

“The things you do reflect on your entire race, and you should consider that before you do shit like that,” I said. “This is how stereotypes are made.” The bartender later told me this was the statement that grabbed his attention away from making his drinks.

“You wanna step outside?”

Still looking him squarely in the eye, I said “I ain’t afraid of you. But I’m not taking this outside because this isn’t about you and me. This is about you and your problem.”

At this point, the bartender intervened and told him to leave. He said “Yeah, I wanna step outside with this guy. He’s done with his beer, he can come outside so we can talk.”

“I’ve got nothing more to say to you,” I said. The bartender told him to get out repeatedly until he left. Then he looked at me and asked, “What the hell just happened? Did he steal from my tip jar or something?”

“Oh yeah he did,” I replied. “And I caught him red-handed. But I couldn’t figure out what to do about it.”

“I heard you say ‘things you do reflect on your entire race’ and I thought, ‘How did the conversation get to that point so fast? Something’s up.'”

“Well yeah, it sure was. I was trying to figure out whether you would believe me or if it would just make a bad situation worse. Do you have any security cameras in here?” I asked.

“This has happened before, hasn’t it?”

“Not that I’ve known about, no. I knew there was something suspicious about him as soon as he came in, talking about his girlfriend being here any minute like that meant anything to me. I should’ve kept my eye on him closer.” He grabbed the jar to see how much was missing from it.

“Okay so put yourself in my shoes,” I said. “If you were sitting on this side of the bar and were in my situation, what would you have done?”

“I really don’t know. But it looks like he didn’t take more than a couple bucks.”

“What was the point of it then? Why would someone dressed up like that with all that bling steal a dollar or two from you?” I asked.

“I dunno that either. It doesn’t make any sense.”

“I’ll have another beer.”

5 minutes later, everybody started arriving and I related my story to them, corroborated by the bartender. Had they been a few minutes earlier they’d have seen the whole thing.

So imagine yourself in the same situation. What would you have done?

10 Responses to A Moral Dilemma