Of the many recent solo flights I had been taking at the time, this was the first I had my nice new digital camera to take with me, and what a beautiful day it was. Cold, but with clear blue skies, calm winds, and a good 30 miles of visibility. By cold I mean temps near 0.

So the goal today was to do a multi-leg flight to two airports more than 50 miles away. The first, Madison/Truax, I’d done before. It’s a semi-busy class-C airport in Wisconsin’s state capitol. Class C means that it is the 2nd-largest and 2nd-busiest classification of airport, next to class B which is reserved for the nation’s largest and busiest like O’Hare, Kennedy, LAX Los Angeles, McCarran Las Vegas. It also means that it’s complex and challenging, because you have to talk to approach control, tower, ground ops, clearance delivery, and departure control through the duration of your time in their airspace, and are under mandatory terminal radar service control – meaning I am on an ATC radar screen and being given strict directions to follow. Getting there is pretty easy, I just fly out over Lake Geneva to Victor Airway V191, pick up the VOR intercept and fly the Madison VOR at a 320 heading straight to the field. It’s a 78 nautical-mile (90mi) flight and it took me 45 minutes with my ground speed around 120mph. To drive it, it’s 125 miles on I-94 via Milwaukee. I landed gracefully on runway 32 and requested taxi to an FBO, to make it an official full-stop arrival.

So after being directed into a parking spot by a ground worker, I drove past a large private business jet and parked next to a Cirrus SR-20 and an old Mooney. I shut down the plane and took a brief break at the Fixed-Base-Operator (FBO) station there, a beautiful place called Wisconsin Aviation just off the main taxiway. It’s a place you’d never know existed if you weren’t a pilot, one of our special privileges I guess you could say. It’s a luxurious clubhouse, with 25-ft vaulted ceilings and a hanging chandelier over the living room with large, plush navy-blue sofas placed before a lage stone-hearthed fireplace. It’s basically the nicest gas station you’ll ever see this side of Beverly Hills. They offer fuel and mechanical services for aircraft.

So after doing some brief calculations of fuel-on-board and ETAs, I called up Flight Service and filed my flight plan for the next leg of my flight. It was to a regional class-D airport just west of Green Bay in Oshkosh, WI. This is the airport where, every summer, a massive fly-in of about thirty thousand aircraft of every imaginable type takes place for the EAA (Experimental Aircraft Association) annual bash. It’s pretty much the biggest event of its kind in all of aviation. I’ve wanted to go for the past two years, but now that I know how to get there, I can definitely fly in for it this summer.

But the trip up there today was uneventful and quiet. The 61nm (70mi) flight took me 39 minutes. A few other planes were arriving as I was and the tower sequenced us, but it was slow enough that the tower controller was also running ground operations. I landed on runway 9 and taxied off to the FBO there, then hopped out for a few minutes to stretch my legs and do the flight plan for the return trip, the longest of the three.

The return trip from Oshkosh back to Waukegan, based on how I planned it to avoid Milwaukee’s airspace, was 108nm (124mi), basically going straight south until I was due east of Kenosha airport and clear of its airspace, then turning to the southeast for the last 20 miles. With the 16mph tailwind, I expected to make great time getting back. I picked 5500ft for my altitude, and the air was smooth and the skies were clear the whole way until I got 10 miles out from Waukegan. Suddenly I faced a wall of clouds down to 3000ft below me rolling in off Lake Michigan, with dramatically reduced visibility over the entire area. I pulled back on the throttle and started a 1500 feet-per-minute rapid descent to get below the thick cloud layer, and dialed up the terminal weather frequency for Waukegan to find out what was going on. Apparently the bad weather that had plagued O’Hare all morning had moved north while I was gone, though it fortunately didn’t bring the snow with it. The broken ceiling was only down to 2700ft, so 53 minutesÂ after taking off from Oshkosh I landed at Waukegan, with my ground speed averaging around 132kts (151mph) for the last leg of the trip.Â  Click theÂ image below to go to the gallery. 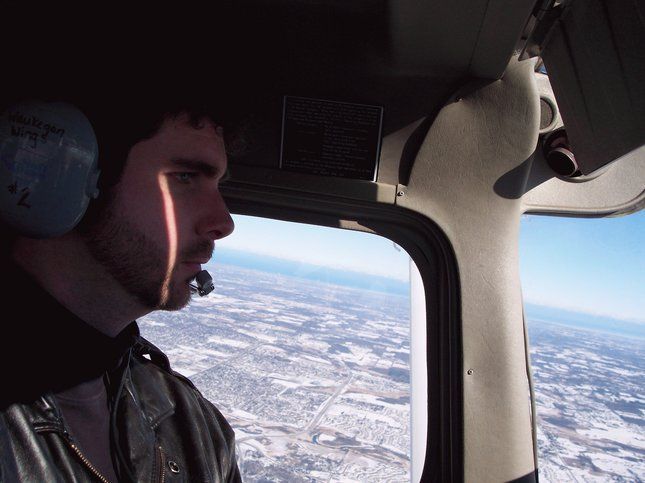