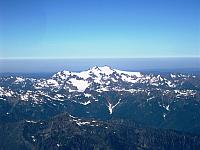 Taken 05-Aug-2006. The Olympic National ParkÂ is the mountainous, uninhabited 2300-square mile area west of Seattle on the Olympic Peninsula, with the beautiful Mount Olympus as its primary terrain feature.Â  Click the image to go to the gallery.