Ordinarily, finding a 4th-gen F-body like this 1997 Firebird in a junkyard is a good thing. But not today. This one was badly mangled and came with its own eerie warning. 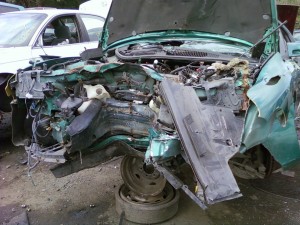 You can just barely see the remains of a badly damaged LT1. 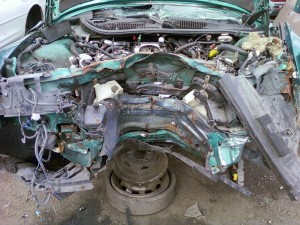 Looking at the hood, and the front framerail, it doesn’t look at all like a tree impact. This car hit something man-made, my guess is the base of one of those lightpoles in a mall parking lot. 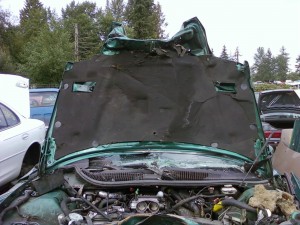 This interior actually doesn’t look that bad, I’d say this one was survivable. In really bad crashes there will be bloodstains on the seats and airbags, but this one doesn’t appear to have any and the passenger compartment is mostly intact. 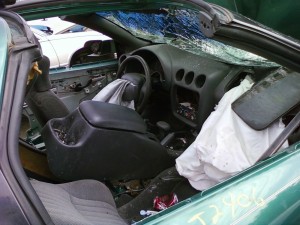 Here is our first clue of what happened. The tachometer, temperature and oil pressure gages are all as they were at the time of the crash. It would’ve been nice if the speedometer was too, but it obviously went to 0 when the car came to a sudden stop. Deep into the redline on an automatic. LT1’s usual redline is 5700rpm, this looks like it’s at about 6400. Probably a reprogrammed engine computer.

This tells us what was happening at the time of the crash. But it doesn’t tell us why. The real cause of the crash I found on the floor behind the driver seat. Take a look at the full-size image close up. You’ll see pink panties, a black lace bra, a used condom, and smokes. Clearly, way too much was going on in this car.