The Legend of The JATO-Powered Rocket Car

Last year, a week or two before Thanksgiving, I was taking my class through some of the particulars of evolution (“how human beings were raised from monkeys” as one of my students phrased it). We were discussing Charles Darwin and The Origin of Species when one of my students asked me how Darwin’s research ship ever got the name H.M.S. Beagle.

Damned good question, when you stop and think about it.

Since I’ve been teaching this subject for 11 years, it’s rare when a student asks a question I can’t answer. But this one was a real pisser. Anyone who’s ever taught in a classroom knows that sometimes you get a student that likes to play “Stump the Teacher”. A kid who asks questions he doesn’t really care about, just to see if he can find a gap in the teacher’s knowledge. Usually these questions are pretty easy to evade, ignore, or even lie about, but sometimes one will catch my interest. This was one of them. You have to admit, “The Beagle” is a pretty dumb name for a ship that cruised the Galapagos in search of exciting bird-beak variations. So I told the student that I had no idea where the ship’s name came from, but I’d find out. After all, I’ve been teaching the same class for 11 years, so I’ve amassed a pretty good variety of books on the subject. Surely the answer would be in one of them.

Hah. I couldn’t find the answer anywhere. My reference books concerned themselves with headier subjects — the Scopes trial and genetic mutations and whatnot — but NOT the name of Darwin’s boat. I looked through every book I could find, but came up dry. After exhausting all my research options, I was thinking about conceding this particular round of Stump the Teacher when one of my kids asked if I’d looked for the information on the World Wide Web.

I said “Of course I looked there. It’s the first thing I checked. Go play in traffic.”

Truth be told, I not only hadn’t checked the Web, I didn’t know how to check it. In addition to being a non-rocket scientist, I’m not (or at least I wasn’t) very interested in computers or the Internet. I know this is a shameful thing for a teacher to say in 1998, but it’s true. I kept meaning to take a look at the Internet-connected computers in the school library, just to see what all the hoo-hah was about, but I simply hadn’t gotten around to it. Actually I was a little bit intimidated by the machines, and kept putting off the inevitable confrontation due to embarrassment. Sure, I could’ve walked into the library during my free period, sat down at one of the machines and tried to figure out what to do on my own, but what if I couldn’t make it work? It wouldn’t be long before someone spotted my baffled expression and realized I was completely lost. So the next day I went to the library during my free period and asked the librarian for help, feeling like Crocodile Dundee asking how to work the bidet. But the librarian had obviously dealt with the situation before, and gave me her ten-minute “Internet For Stupid Teachers” course without making me feel any dumber than she had to. As soon as she left me alone with Netscape running and a search engine online, I typed “Darwin” into space provided, and let the machine do its thing. When the results of my search started filling the screen, the first thing I noticed was that there were over two MILLION sites listed as being Darwin-related.

The second thing I noticed was that none of them seemed to pertain to Charles Darwin, the most famous naturalist in history. Instead, they all seemed to focus on “The Darwin Award”, an “…honor (posthumously) bestowed on people who did the most good for humanity by removing themselves from the communal gene-pool”.

Which really isn’t a bad idea, when you think about it.

Of course I expected this “award” to be a piece of tongue-in-cheek humor, the sort of thing that used to make the rounds via smudgy Xeroxes in the days before E-mail and the World Wide Web. And that’s exactly what it turned out to be. What I wasn’t prepared for was my very first encounter with the story of the Rocket Car in print. Not only in print, but in a format that can reach around the world. When I read the story, I didn’t know whether to laugh or cry or get nauseous, but I think if I were alone, I’d have done all three. Based on the number of different Websites cross-referenced to the word “Darwin”, I’ll bet that if you read the Rocket Car story from a computer monitor, the version you saw looked something like the one that follows. The text, anyway. The high-tech, precision-drafted engineering diagrams are my own addition. Don’t bust my balls about them, either. I already told you that I’m not a motorhead or a rocket scientist, and I’m no Leonardo da Vinci, either. 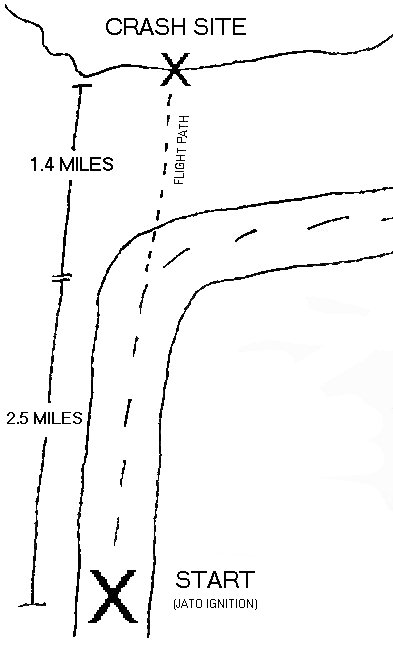 The Arizona Highway Patrol came upon a pile of smoldering metal embedded into the side of a cliff rising above the road at the apex of a curve. The wreckage resembled the site of an airplane crash, but it was a car. The type of car was unidentifiable at the scene. The lab finally figured out what it was and what had happened.

It seems that a guy had somehow obtained a JATO unit (Jet Assisted Take Off–actually a solid fuel rocket) that is used to give heavy military transport planes an extra “push” for taking off from short airfields. He had driven his Chevy Impala out into the desert and found a long, straight stretch of road. Then he attached the JATO unit to his car, jumped in, got up some speed and fired off the JATO!

The facts as best could be determined are that the operator of the 1967 Impala hit JATO ignition at a distance of approximately 3.0 miles from the crash site. This was established by the prominent scorched and melted asphalt at that location. The JATO, if operating properly, would have reached maximum thrust within 5 seconds, causing the Chevy to reach speeds well in excess of 350 mph and continuing at full power for an additional 20-25 seconds. The driver, soon to be pilot, most likely would have experienced G-forces usually reserved for dog-fighting F-14 jocks under full afterburners, basically causing him to become insignificant for the remainder of the event. However, the automobile remained on the straight highway for about 2.5 miles (15-20 seconds) before the driver applied and completely melted the brakes, blowing the tires and leaving thick rubber marks on the road surface, then becoming airborne for an additional 1.4 miles and impacting the cliff face at a height of 125 feet leaving a blackened crater 3 feet deep in the rock.

Most of the driver’s remains were not recoverable; however, small fragments of bone, teeth and hair were extracted from the crater and fingernail and bone shards were removed from a piece of debris believed to be a portion of the steering wheel.

2 Responses to The Legend of The JATO-Powered Rocket Car